The difference Between VM Encryption in vSphere 6.5

More and more people are starting to ask me what the difference is between VMCrypt aka VM Encryption and the beta feature we announced not to long ago called vSAN Encryption. (Note, we announced a beta, no promises were made around dates or actual releases or releasing of the feature.) Both sounds very much the same and essential both end up encrypting the VM but there is a big difference in terms of how it is implemented. There are advantages and disadvantages to both solutions. Lets look at VM Encryption first.

VM Encryption is implemented through VAIO (vSphere APIs for IO Filters). The VAIO framework allows a filter driver to do “things” to/with the IO that a VM sends down to a device. One of these things is encryption. Now before I continue, take a look at this picture of where the filter driver sits.

As you can see the filter driver is implemented in the User World and the action against the IO is taken at the top level. If this for instance is encryption then any data send across the wire is already encrypted. Great in terms of security of course. And all of this can be enabled through policy. Simply create the policy, select the VM or VMDK you want to encrypt and there you go. So if it is that awesome, why vSAN Encryption? 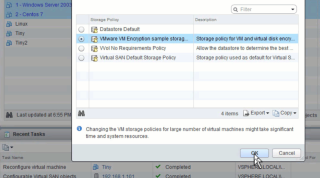